Unexpectedly, creating caricature portraits to commemorate a person's life or milestone has become one of my mainstays.  I've created literally hundreds - some of which are scattered around the globe - and it's the part of my act where my own rural community has found me the most palatable!

The proposed recipient is obviously the primary focus in the composition but I also try and gather in other dominant strands of their life.These artworks have been used to woo romantic interests, thank host families, mark important occasions and farewell politicians departing office. Some have made it on to book covers and even on to the cover of the subject's funeral program - which gives me a kick, it being the image the family decided summed up that whole, multifaceted life. In fact I've been told some are regarded as heirlooms because of the weight of family information captured there.

• There's fast and loose ( and more economical) done initially as an ink cartoon on tinted art paper then enhanced with acrylic washes.

•  And there's 'The Major Work', fully painted on stretched canvas. 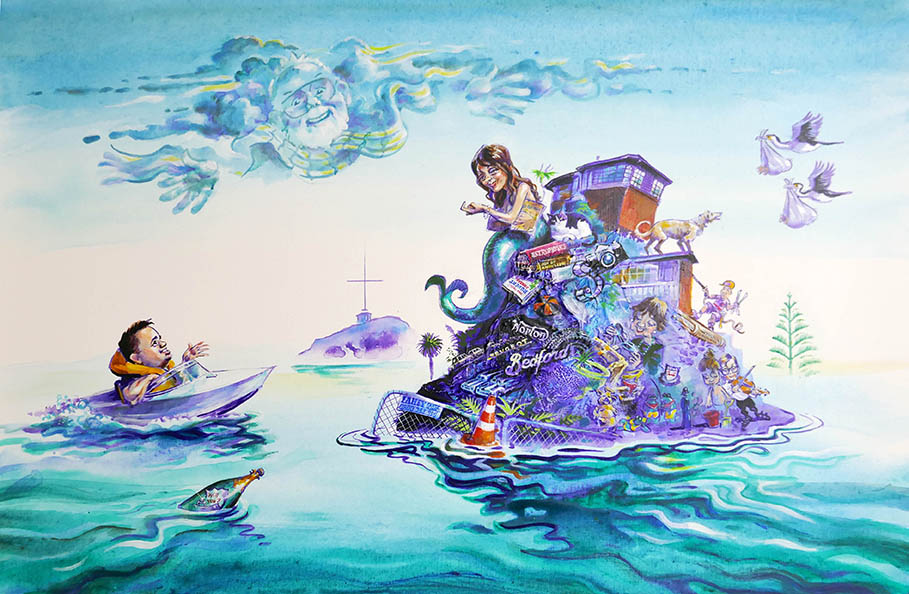 The client of this fun commission wanted the rock supporting
her unique family home to be encrusted with memorabilia
- and her as a siren, enticing future hubby into her waters.Year2021 Several sports organisations chipped in to
commission this portrait of a departing ex-councillor.Year2021 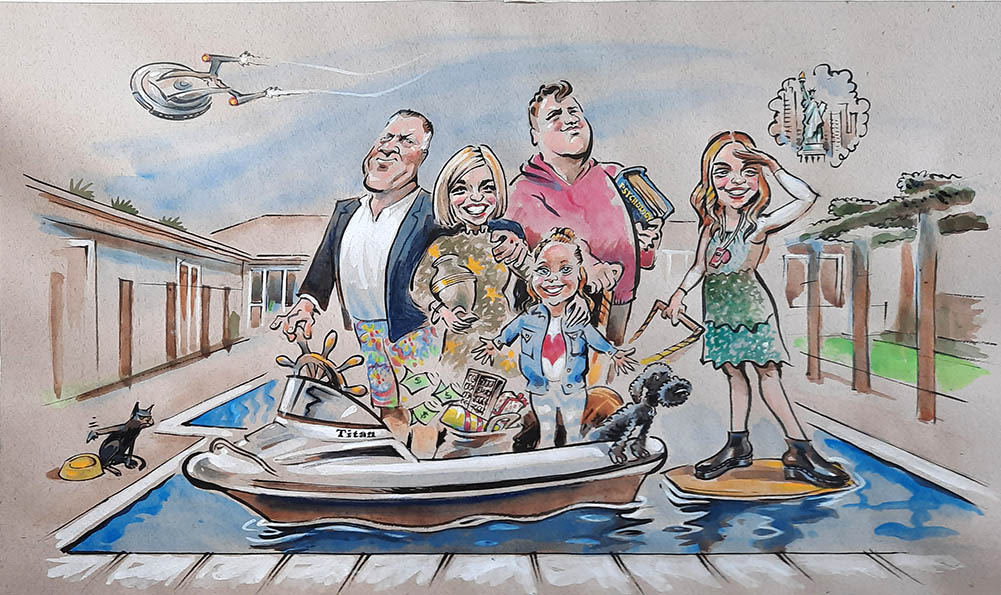 This line & wash was commissioned to capture a family dynamic which can't last.
Soon the older kids go to uni or adventuring and the family home
will downsize.Year2021

Friend Bill and his grandkids
- flourishing with enthusiasms.Year2021 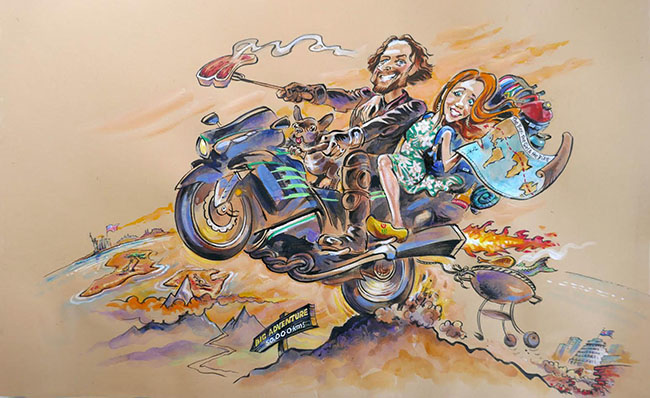 Dutch adventurer wanted to present partner with an image of his
favourite things ( dog, bike, her!) and indicate the mega road trip
they're planning.Year2021 A retirement present for a marine engineer
with a keen interest in brewing
and car restoration.Year2021 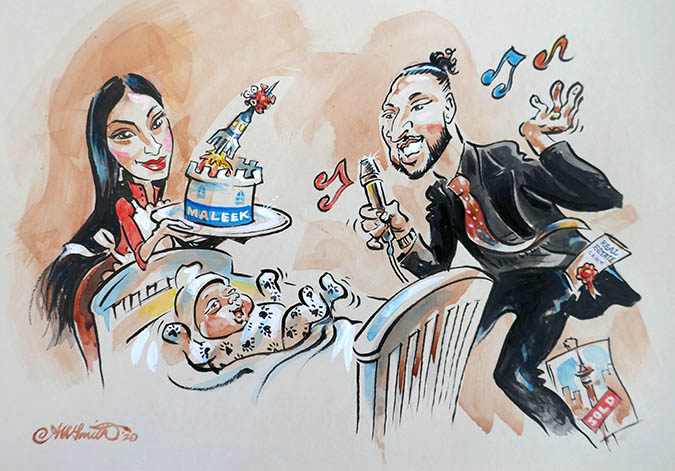 This Auckland gent wanted a line & wash
to record the trajectory of his multi-faceted life:
singer, sound-engineer, new dad and real estate agent
- and his wife's clever production of fantasy cakes and baby.Year2020 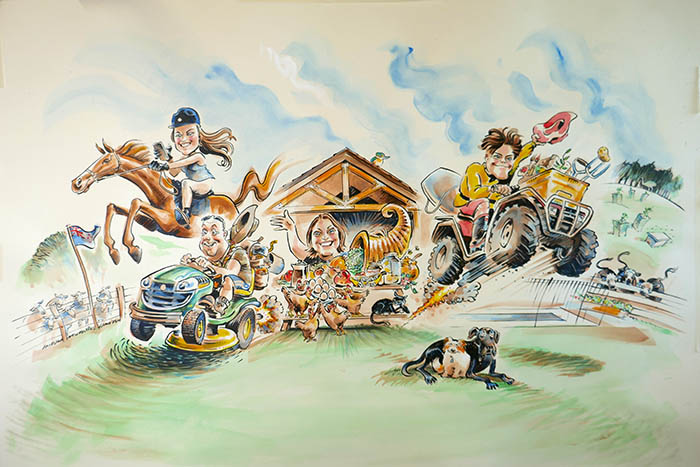 This paintings role was to record,
in transient times,
a happy vibrant time on a colourful estate.Year2020 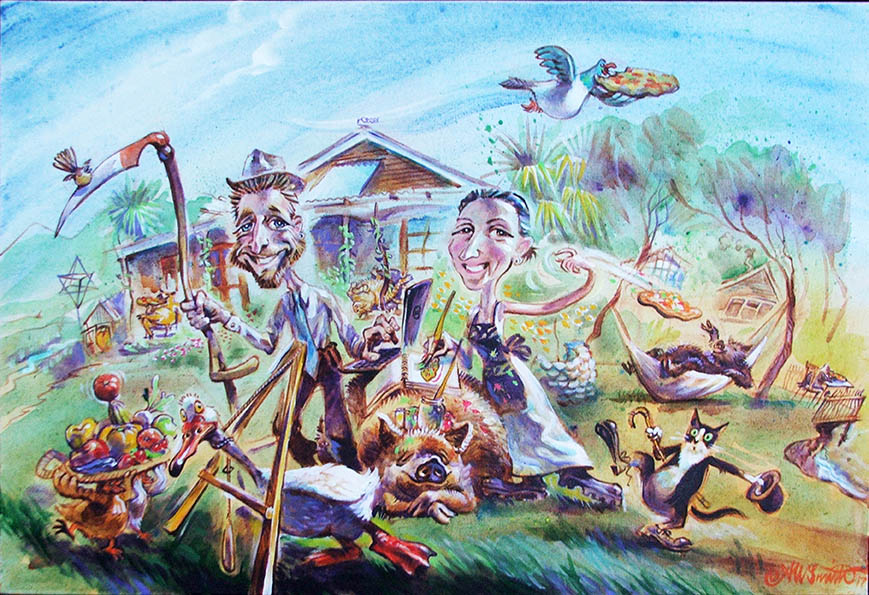 An acrylic on canvas rendering
of Olmec and Melisa - and assorted critters
on their permaculture haven.Year2017 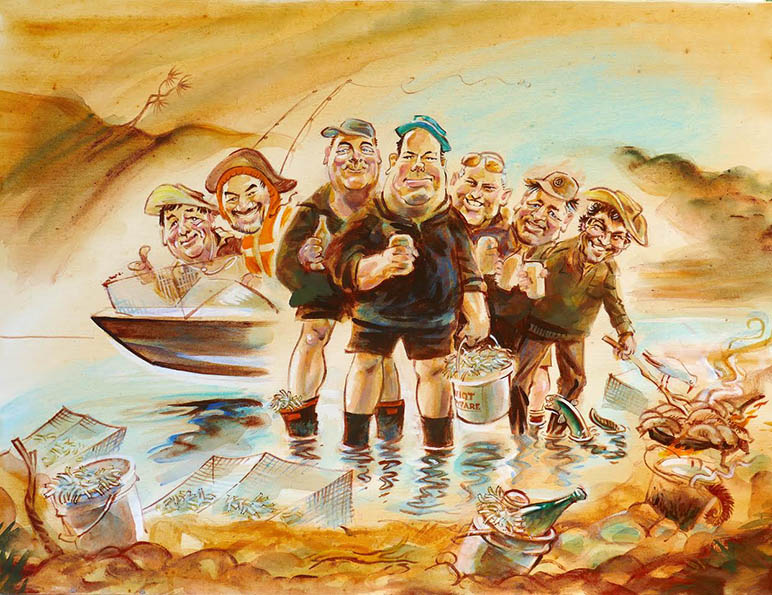 This bunch of Cheviot worthies have gone out
whitebait wrangling together for the past decade.

Something to be commemorated with an acrylic
on stretched canvas.Year2019 A farewell gift from the port to the tug captain returning to Oz.
Facing 2 weeks quarantine in Singapore then another lot
in Perth, only the prospect of his favourite tipple awaiting
keeps him going.Year2020 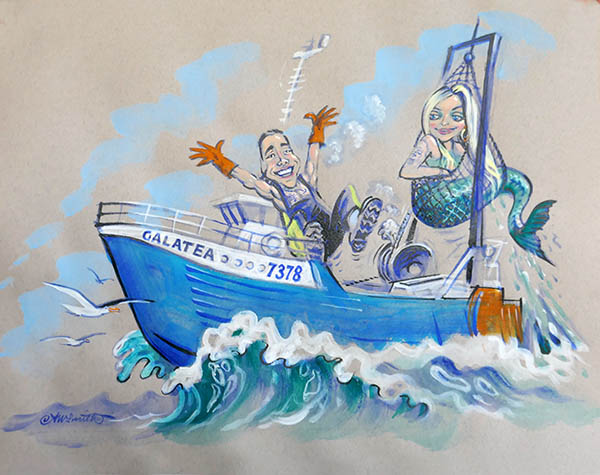 A fast and loose acrylic
for the mermaid to present to her
fishing-boat owning boyfriend
on his birthday.Year2020 A farewell gift from the Hurunui Council
to its retiring mayor. This style lets you show other facets of the subject's life.
He may be an apiarist now - but he was once a commando!

It was a surprise birthday gift. He seemed to like it! A line & wash engagement present for a physio
featuring some of the icons of his life ( including his betrothed!)
and the location where he proposed.Year2019 A rapid line & wash for a client
before he and his keen photographer mate,
( about to turn 60 ) cruise-shipped off to Oz
for the Melbourne Cup.Year2018

There was heaps of fodder in the brief
for this gentleman. From psychiatric nurse, through
motorcycle cop and Elton John security guard to 76yr old biker
and fuel tanker driver! Thank you, thank you...Year2018 This is my second study of Ray.
The first, and tragically Ray himself were lost
when his house burned down
three weeks back.Year2016 Englishman Pete wanted an image
which captured the utopian
future of his young marriage.Year2008 ...an airbrushed study from way back
of an animator and his dressmaking wife.Year1987
...a thank you gesture for a sculpting architect. ...a retirement gift for a flying vet.

in which washes of contrasting colour have been used
to differentiate between the harsh zone our subject
is escaping from and the idyllic one he's headed for.

A line and wash on paper...

commemorating the marriage of a carpenter
and a nurse.

Starting to develop a work on canvas. A fully rendered work on canvas A 'fast & loose' rendering of our lot- (they're almost all there!)